We’ve all driven past or visited a cemetery at some point in our lives. But what happens when the cemetery comes to you by way of your dreams? Is this “cemetery dream” some type of warning telling me that I’ll soon be residing there? Is it a message from beyond, a tap on the shoulder from a long passed relative reminding me of my mortality or is it because I had just watched the wrong movie last night? Even if you don’t know the answer to any of these questions, you should know that the dream was not meaningless.

So, how do you make sense of it? Most people don’t try. They write it off as a bad dream and go back to bed, maybe with the light on. If it was your child, you tell them “it was just a dream, go back to bed”, exchanging an opportunity to educate your son or daughter, for some more sleep for yourself.

Dreaming, at one point in my life, was a passion of mine. I read more books on dreaming than probably any other subject up until I was in my 30’s. I recorded over a thousand dreams with some 40-50 conscious projections or, to put it simply, lucid dreams where you travel and talk to other people in the dream, all while being completely awake in the dream. Do I sound crazy? Well I hate to break it to you but you do the same thing. The only difference is you may not remember it. The sub-conscious mind does not easily communicate with the conscious mind. You have to train it. Putting it another way, when you sleep, you don’t often wake up in the dream and possess the same consciousness and awareness that you have in the waking state. But you can.

If you don’t remember your dreams it’s that simple; you don’t remember them. But by no means does it mean that you don’t dream. If you didn’t dream you’d most likely go insane. Dreams are where we work out our personal problems, where we straighten out our character and solve problems of the inner psyche. It’s also where many people claim to have had angelic messages, found answers to life, and comfort in the face of extreme emotional and physical pain. Some claim to have even received direction on how to continue with their lives in the face of adversity. To put it mildly; dreams are something to take seriously.

So how does all this relate to seeing a cemetery in a dream? When people are specific in naming places or acquaintances in a dream, you’ll have some analysts who will pull the symbolism card out as if it’s the answer to all interpretations. It’s not. I read a couple dream symbolism books and quickly came to the conclusion that they were useless. You and I could have the exact same dream and the dream could mean two entirely different things based on our life experiences.

Take this as just one example. Two people dream and both report having been in the water with a dolphin in their dreams. The dolphin was a significant part of the dream for both. One of the dreamers found it terrifying while the other found it uplifting and encouraging. Here’s where if you’re analyzing the dream and you have a presupposed meaning attached to dolphins, you’ll get it wrong.

Let’s say the terrified dreamer had, at one time been to Australia and was at the beach.  They were swimming and had mistaken a shark for a dolphin. They had actually swum toward it and found out too late that what they thought was the fin of a dolphin was actually a great white. They survived because the shark was only six feet long and took small bites. Now, the happy dreamer had a life experience where they had capsized their boat and a dolphin had pulled them to shore and saved their life. (This has actually happened). So one person’s life experience was terrifying because the dolphin reminded them right away of a shark which almost killed them. The other, was saved by a heroic dolphin who appeared to smile the entire time they were saving them. (I don’t know how dolphins can look so happy all the time but they do.) 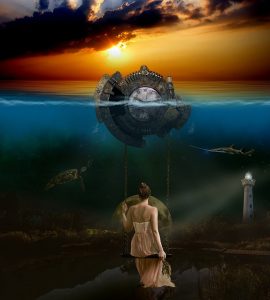 This would explain why one was terrified in the dream while the other was happy. Now to interpret what the dream meant, you’d at least have this meaning of a dolphin, personalized to each dreamer, to build on for the interpretation. Maybe the dolphin that was actually a shark represents trust issues while the other dolphin represents that a savior is always present during adversity.

So, to get back to what a cemetery might mean in a dream I would have to first ask myself what cemeteries represent to me?

I personally know several people (one being my wife) who find cemeteries are comforting, peaceful and a tranquil place to think. They view a cemetery as where life histories are located, much as how a book is to a library, a resident deceased person is to a cemetery; they both have an incredible story to tell.

I’ve also spoken with other people who are terrified to walk within the gates of a cemetery for a reason that can only be found within their own life’s history. So to understand what any person, place or thing was doing there in your dream, you first have to ask yourself what that person, place or thing means to you. Whatever you dream about, it’s usually representative of some character aspect of yourself.

But that’s for another conversation.

Death After Life After Death